Home > About Seicho-No-Ie and Our Principle

Seicho-No-Ie (SNI) values the common religious truth of religions and aims to realize individual happiness by spreading a better way of life among people, and, furthermore, to bring about world peace by realizing peace among nations, peace among religions, and harmony between human beings and nature. In Article 1 of the â€œSeven Promulgations of Light,â€ which SNI has pronounced since its foundation, it is clearly stated that â€œwe resolve to transcend all religious and sectarian differences, worship life, and live in accordance with the laws of life.â€

In the latter half of the twentieth century, global environmental issues have reached such a critical point that all life on earth, including human beings, is facing danger. That is why SNI has decided to address these issues on a full-scale basis. In 2001, SNI International Headquarters became the first religious organization in the world to obtain ISO 14001 certification, published in ISO Management Systems magazine issued by the ISO Central Secretariat in Switzerland. Since then, this certification has been obtained by all the SNI bases of propagation in Japan, United States Missionary Headquarters, Brazil Missionary Headquarters, and Republic of China Missionary Headquarters.

SNI proclaims explicitly in its Environmental Policy that the religious mind of worshipping all beings is required to solve todayâ€™s global environmental issues. (see here). It also formulates concrete action guidelines to curtail global warming and is actively promoting them.
Seicho-No-Ie Official Website 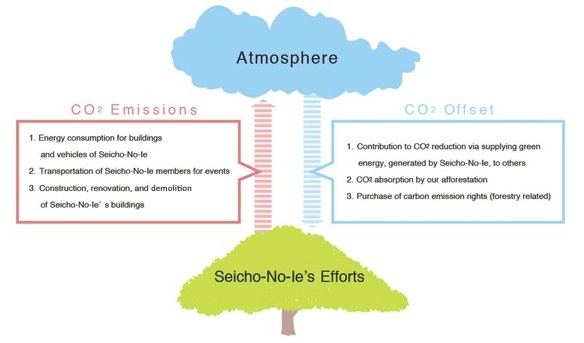 Since 2012, Seicho-No-Ie has been able to sustain a “Zero Carbon (commonly referred to as “carbon neutral”)” state, in which the amounts of CO2 emission and offset are equal to each other, every year at all of our 63 facilities in Japan. Currently, we are:
(1) making a contribution to CO2 reduction by supplying the power generated with green energy to others and
(2) increasing CO2 offset by afforestation, which can absorb CO2.
In addition, we are also purchasing carbon emission rights (forestry related), but our ideal is to realize being “Zero Carbon” only through those two efforts mentioned above.

Seicho-No-Ie International Headquarters “Office in the Forest” in Hokuto-shi, Yamanashi

A wooden two-story building, with the total floor area of 8154ãŽ¡. It is a ZEB (Zero Energy Building which emits no CO2), utilizing green energy.

Seicho-No-Ie “Office in the Forest” is a wooden two-story building, with the total floor area of 8154ãŽ¡, and about 90% of the lumber used for it is FSC certified and from local forests in Yamanashi. The remaining 10% also comes from Japan. With the microgrid assembled by combining our energy usage conservation effort, solar power generation (470kW), wood biomass power generation (175kW), and the large-capacity lithium ion batteries (400kWh), this building has achieved the energy-use and production amount to balance out to zero every year as a ZEB (Zero Energy Building) since its opening in 2013.

A greenery space open to the public in the midst of the city featuring native vegetation in the site where Seicho-No-Ie International Headquarters used to be.“Brochure of “Grove of Lifeâ€

Harajuku “Grove of Life” was completed in February 2015, through afforestation of the site which had been utilized as the Seicho-No-Ie International Headquarters with five buildings, all of which were torn down except for the “Tower of Light.” This green space derives from the way of thinking that the heaven and the earth God created are perfect as described in Genesis, chapter 1. In creating this space, we have neither collected a portion of nature nor excluded another portion of it for selfish convenience of humans, but we have created the space by planting trees according to the native vegetation and respecting biodiversity that accepts all living things. Specifically, while preserving the existing trees in the site, we have newly planted about 5,500 trees and shrubs and about 48,000 pots of ground cover plants that grow in this area, which once was called “Musashino.” Its native vegetation includes deciduous trees, such as Japanese storax, evergreen trees, such as Japanese blue oak, fruit trees, such as Japanese medlar, and ground cover plants, such as Japanese dogtooth violet.
Two arbors (hermitages) along the walking path are set up as space for meditation and/or appreciation for nature. It will be our great pleasure if you enjoy the blessings of nature by walking in this grove, where trees, plants, and fruits change according to the passage of the seasons, and birds, butterflies, insects and the like dance to enjoy nature.